Christie’s is using a variety of techniques to get the paintings out of Europe and over to the unquenchable NY market. Recently, that has meant fronting legal fees for WWII-era restitution claims. But now we hear of a new method, which we might call accidental-but-actually-intentional smuggling.

The case centers around an oil sketch of The Hunt of Meleager and Atalanta by Rubens. The picture was the star lot in Christie’s old master sale in London in December of 2005, going for £3,144,000. The Art Newspaper reports that name of the buyer has not emerged, but he is understood to be a private collector from the New York area. END_OF_DOCUMENT_TOKEN_TO_BE_REPLACED

THE DECIDER now gets to even decide Provenance

Um…didn’t anyone notice the spectacular irony in this?!! Leonard Lauder, older brother of “Restitution” Ronald, is now having his own Klimt demanded back from him. Better yet, the piece was sold to Leonard by Ronald’s long time mentor Serge Sabarsky. It was Sabarsky’s idea to persuade Ronald to open the Neue Galerie back in 1996, soon before he died. He is now immortalized with over-priced Sacher Torte at the museum’s Cafe Sabarsky. We also witness the re-emergence Shoah-Chaser Randol E. Schoenberg (you know, grandson of 12-tone Arnold), but this time, instead of helping the Lauders acquire Klimts, he’s shaking them down for one they already own. And even with all this fabulous Viennese Secession Incest that’s really not the story here.

No folks, what is really big news here is that now the THE DECIDER can decide about the provenance of a painter’s oeuvre. This may sound like a minor development, but if Schoenberg’s strategy works it could place certain anointed art historians (basically those who write the catalogue raisonne for a given painter) in position to pass judgments worth millions of dollars. Alfred Weidinger has tred into this uncharted territory with his compendium of Klimt’s entire oeuvre.

Just look at this case, for example. Klimt painted Blooming Meadows around 1904-5 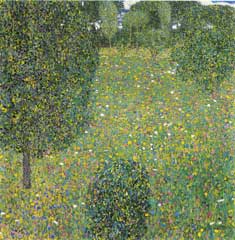 END_OF_DOCUMENT_TOKEN_TO_BE_REPLACED

The controversy over newly discovered works claiming to be by the world’s most expensive paint splatterer has gotten even more interesting. We reported a few months ago about the fallout from paint tests showing that a miraculous find of unknown Pollocks were fresher than his crash-test corpse. Now the IHT reports that Alex Matter, the owner of the trove of 32 small works found in his father’s storage locker might have already sold some of them (which should surprise nobody).

Christie’s: Yo, European Museums, we’re coming for your artworks!

It used to be back in the good old days of Duveen & Co. that the insatiable NY market would have top artworks smuggled out of Europe in false-bottom suitcases. Now Christie’s has struck upon a new tactic: providing legal support to heirs with restitution claims for artworks in European public collections. Since such procedures can take decades, it’s an expensive investment of resources for the auction house, but the strategy is now starting to pay enormous dividends.

Auction records for three Central European expressionists have all been set by restituted art works:

Once Willi Bongard created his Kunstkompass, the methods for predicting someones ascendancy became reliably methodical. Or maybe he just made it a self-fulfilling prophecy. His system of points was based on the pillars of canonization: display in major museums and inclusion in essential texts. Now a new company has refined the research, allowing machines to tell us what is our most valuable art. Brilliant idea! This woulda saved them all soooo much trouble back in the 19th Century.

Both major auction houses have announced their year-end results for 2006, and, surprise, surprise, Christie’s did way better: $4.33 billion in sales, compared to $3.66 for Sotheby’s.

I point to the single clearest reason for Christie’s success, and it’s that the firm is run as a single-proprietor entity.
END_OF_DOCUMENT_TOKEN_TO_BE_REPLACED

Well, wouldn’t you know it, two days after I drew our readers attention to the problems inherent in the Rembrandt recently auctioned at Sotheby’s, then the IHT picks up the same story. The article describes the problems of Rembrandts on the market and specifically discusses the sale of St. James the Greater and how it had to overcome numerous technical difficulties in order to reach it’s modest sale price of $25.8 million. We are told the insightful observation that the piece had been offered at the 2006 European Fine Art Fair in Maastricht for $45 million. Nice try. What the article fails to notice, though, which Art Miser readers had an exclusive on, is the Footnote of Death.

Pollock surely could not have dripped this

Who better to strain the connoisseur’s fine balance of art and science than Jack the Dripper, the guy who didn’t even have a brushstroke. The NYT reports to us today on one of the most befuddling cases of art authentication plaguing the world’s currently most expensive painter.

END_OF_DOCUMENT_TOKEN_TO_BE_REPLACED

France caves in to Arab cash, sells half of Louvre

The French government has struck upon a truly brilliant method to dump their underutilized art objects on the culture-starved, status-craving gulf statelet of Abu Dhabi. The dynamics of the relationship are not that different than what Duveen realized in the late 19C when he saw that Americans had a lot of money and Europeans had a lot of art. Primary difference nowadays is that the relationship is between states and their public collections, but the dynamics work just the same as it did between private sellers (impoverished aristocrats) and buyers (American robber barons) in Duveen’s time. And of course, these days it’s the gulf states that have a lot of cash.
END_OF_DOCUMENT_TOKEN_TO_BE_REPLACED